These rumors, as expected, come from MSW, but also rely on a corroborated Reddit post, so I just wanted to give out the proper credit. Of course, Nick and I will riff on these and cook up our own speculations on the next episode of the SWT Show, so make sure to get subscribed to hear our stupid hot takes.

Anyway, if you read our last rumor post, then you’re familiar with this idea that there is some sort of Uber-powerful Sith Fleet milling around in the Unknown Regions, and that it belongs to Palpatine and his contingency plan for the Empire’s demise. This fleet is key to his return, and more than likely tied to a new mission Kylo Ren is on to find it.

According to MSW and Reddit, Kylo will be given a wayfinder device to help him find the Sith Fleet, or to call the Sith Fleet to him. This device will be given to him by what people are calling an Oracle, and this creature is rumored to be very odd looking, and sitting a top a head. You can check out more on the Oracle and its rumored look on Reddit.

It’s rumored that Kylo believes this device will be the key to unlocking Palpatine’s legacy, but it will cause the troubled Skywalker-Solo problems, because apparently Palpatine won’t be too keen on sharing his powerful toys with Anakin’s grandson. It sounds like Kylo thinks this device and the fleet will be his to do what he wants with, but Palpatine won’t be having any of it. This could lead into the rumored fight we heard that involves Palp’s vessel, Kylo, and Rey, in which Kylo ultimately beats the vessel, but is possessed by Palp, and needs Rey to kill him to redeem his arc. Very interesting indeed.

There’s also been some more information about a rumored Castle location in The Rise of Skywalker. Apparently, this is where Kylo will get his helmet fixed by the “ape man”, and this “ape man” is the caretaker of the castle, which many think will be Vader’s Sith Castle on Mustafar. Could this be Kylo’s new home base with the Knights of Ren? Only time will tell, but I’d love to see more of Vader’s home on the big screen.

It’s also rumored that the “ape man” will help Kylo and the Knights activate a special device, which could very well be the wayfinder discussed above. 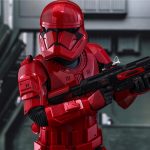 Rumor: Zorri’s Ship May be Connected to Rey’s Past in The Rise of Skywalker