It’s been a dry week of Star Wars anything, so for the sake of content I’d like to present you with a Book of Boba Fett rumor, which should be taken with a huge grain of salt.

Apparently, there will be a rival gang leader that Boba gets mixed up with, and the leader’s name is Hammerhead. This comes via a second and third hand source from someone on Reddit who knows someone who was cast as an extra on the show. It’s not clear if this character is the Hammeread Ithorian from A New Hope, or another Ithorian, or a new gang-like leader altogether.

This rumor got further fleshed out over the weekend with additional updates including a description of a fight between Boba and Hammerhead. Apparently Boba and Hammerhead square off between each other and their own guards. Hammerhead and Boba survive, but some of the guards do not. Boba is apparently guarded by Fennec Shand and a generic character, while the other guards sound like Gammoreans. There’s also a bit about Boba and Hammerhead needing to team up after their melee, so there’s a great chance that if this is true, Hammerhead is more of a MacGuffin to lead us to the show’s big bad. 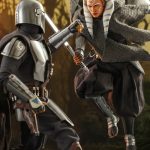 Rian Johnson Wants to Direct an Episode of The Mandalorian