This latest rumor comes from Reddit via the HolonetMarauders, who seem to have a smaller following than us, and while that may mean nothing, I’m treating it as a wild rumor at this point.

You can check out their full reveal video below, but the main gist of this rumor is that a Star Wars comic book character, one who has only appeared in the comics, will become flesh and blood during The Mandalorian Season 3. This character is none other than Black Krrsantan, who has appeared in more than a few Star Wars comics over the past few years. He most notably worked with Dr. Aphra, but he’s been used by many evil doers in the Star Wars universe to foil the plot of the good guys and girls at every turn.

I mean who knows if this is even remotely true, but the setting of The Mandalorian would be ideal for a character like BK, who quite frankly is a bad mother fucker. I’m talking evil Chewbacca times a 1000, so I think he’s definitely a natural fit for the tone of The Mandalorian.

Nick and I will talk more about BK on next week’s episode of the SWTS, so don’t forget to tune into the Star Wars Time Show on a weekly basis via our podcast platforms or via YouTube if you prefer the livestream angle.

Anakin Skywalker Almost Made It Into The Last Jedi 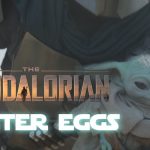