The Warp Zone has dusted off its Recap Rap series, which takes films and recaps their main events and characters with a rap battle like delivery. In this episode, they recap the events of Rogue One: A Star Wars Story, the first Star Wars film with no opening crawl, which just so happens to get a mention in the rap.

The bit is pretty fun, and the tune is catchy, so it’s worth a watch and listen if you’re up for a new delivery of Rogue One’s narrative. Check it out above to feel the flow of the Force.

Former scientist Galen Erso lives on a farm with his wife and young daughter, Jyn. His peaceful existence comes crashing down when the evil Orson Krennic takes him away from his beloved family. Many years later, Galen becomes the Empire’s lead engineer for the most powerful weapon in the galaxy, the Death Star. Knowing that her father holds the key to its destruction, Jyn joins forces with a spy and other resistance fighters to steal the space station’s plans for the Rebel Alliance. 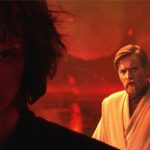 Star Wars: Revenge of the Sith in 5 Minutes