The circus that has become of The Rise of Skywalker’s plot continues today with yet another crazy revelation from the novelization of the film.

Apparently, Rey’s Dad is not a normal being at all, and he’s not the product of Sheev shagging some lady like the pimp that we think the Senate is. Rey’s Dad is in fact a clone from Palp’s DNA, but not an identical clone per se.

You see, as his worshipers were working on clone vessels for Palp, one of the standcasts yielded his “son”, but the offshoot was powerless and disgusted Palpatine. Although, he kept him alive because he thought that maybe this “son” clone could pass on his magical bloodline through some good old fashioned humping, which he succeeded at by parenting Rey.

I mean this shit is getting bonkers at this point, and only shows how much story was kept from the film in favor of a breakneck pace. It’s a shame quite frankly that all of these little details weren’t in the film, but in the case of this one, I think it makes Rey’s already now busted backstory even wonkier. Her Dad is a clone of Palpatine? Really? It was weird enough to have her as a Palpatine to begin with, but now things are getting flat out strange. 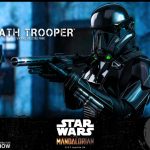 Hot Toys Death Trooper from ‘The Mandalorian’ Up for Pre-Order