The Making Star Wars team has put out another hefty rumor for Star Wars: The Rise of Skywalker, and if you’re not into SPOILERS, I’d go ahead and leave now, but not before you subscribe to our podcast and YouTube channel!

UPDATE – So Pablo Hildalgo has debunked this via Twitter:

The rumor comes from the MSW Patreon cast that someone transcribed the good bits from on Reddit. Basically, Han Solo is Rey’s Dad, but Leia isn’t her Mother! Yeah, let that sit a bit.

The way this scenarios is described suggests that while Leia and Han were estranged, Han got some random lady pregnant with Rey. No one is sure if Han or even Leia knew about Rey, but they do speculate that Ben possibly did (I’m guessing through his Dark Side manipulation), which is why he hates his Dad so much and left his family altogether to join the Dark Side and First Order.

Fans are none too pleased with this unconfirmed rumor, just read the Reddit comments, but again, it’s a rumor and unconfirmed, so put down your pitchforks for now. The theories laid out would make sense though, so I’m not just discounting this rumor.

Check out my full take below! 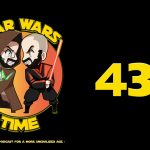