Rey’s parentage was a hotly debated subject from the moment she was revealed as a character. There were fan theories that called for her to be everything from Luke Skywalker’s daughter to the next chosen one born of the Force, but in the end she was a Palpatine.

It seems like most of the internet hates that decision, but according to Daisy Ridley, Rey’s bloodline was in question right up until The Rise of Skywalker.

During an interview with Josh Gad, Ridley mentioned that TFA and TROS director J.J. Abrams was toying with the idea of Rey being a Kenobi during the filming of TFA and hadn’t settled on her being a Palpatine until TROS time.

This revelation makes sense given the very prominent voice of Obi Wan Kenobi during Rey’s Force vision in TFA. Obviously things changed for Rey during the TLJ time and then again in the TROS timeline. Ultimately, Rey’s story was marred by disconnected narrative threads and poor decision making at the executive level within Disney and Lucasfilm. 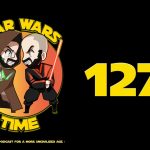