Fans have been wondering what character was featured in the box art for the Black Series Wrecker figure for weeks now, but thanks to the latest episode of The Bad Batch, it now appears who the figure just may be.

If you watched “Battle Scars”, then you are aware that Rex made his Bad Batch debut, and in it, he is seen wearing a hooded poncho over his clone armor when he’s not doing clone things. Now if you look closely at Wrecker’s box art from his upcoming Black Series figure, you will see what appears to be an arm coming out of a poncho, therefore, one can guess that the Bad Batch Black Series line will eventually be graced with a Rex in Poncho figure to collect.

I would say that this is a done deal, so it’s just a matter of waiting to see if Hasbro gets cheap on the poncho and goes rubber or the crappy fabric route for it.

It was also revealed yesterday that KOTOR’s Zaalbar is headed to the Black Series Gaming Greats line, and as you can see, he’ll be a money saver as the figure looks like shit, and it’s of a character that pretty much no one knows about that was born after the year 2000 and hasn’t played the remake of KOTOR, or the mobile Star Wars Galaxy of Heroes yet. 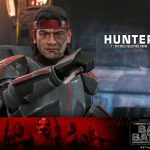 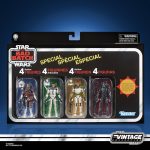