An exclusive report from Buzzfeed News states that Laeta Kalogridis is currently writing a Knights of the Old Republic era movie for Lucasfilm.

Kalogridis, who recently worked on Alita: Battle Angel, touts an impressive screenwriting resume that includes Martin Socrsese’s Shutter Island, Terminator Genisys, and Alexander. She is also credited as one of the creators of Netflix’s Altered Carbon.

Clearly Kalogridis has some amazing Sci-Fi Fantasy work under her belt, so it will be very interesting to see her approach to one of the most beloved Star Wars expanded universe properties of all time. According to Buzzfeed’s sources, she is close to completing 1 of 3 scripts that would make up a full trilogy of KOTOR movies.

It is unclear at this point if Kalogridis is working off of the KOTOR source material that involves Darth Revan, Darth Malak, and Bastilla Shan or if she is working within the time period of the game with new characters.

This news falls in line with Kathleen Kennedy’s statement that Lucasfilm was exploring the KOTOR space for potential on screen material.

As for where this potential trilogy will fit into the Star Wars release schedule, that remains unknown. We know for sure that David Benioff and D.B. Weiss will be writing and leading production on the next Star Wars trilogy release that is slated for 2022, 2024, and 2026, so, if greenlit, Kalogridis’ new slate of films could either fit in between the films from Weiss and Benioff or come somewhere after those film.

One other possibility to consider is that these films could be Disney+ exclusives. Bob Iger, Disney’s CEO, did state that there were no plans to bring Star Wars movies to the new streaming platform, but who knows what might have changed in recent months. Either way, we will be sure to keep you updated on this story as more breaks and all things Star Wars related!

The Star Wars Timeline via Galaxy of Adventures 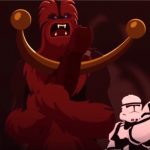 The Mighty Chewbacca Gets Glorified in Latest Galaxy of Adventures Short