A series of images have leaked online that many are claiming to be from a set for The Mandalorian’s third season. One of the images and some insights from Making Star Wars, may offer up some plot details and what types of enemies Din may be facing the next time we see him on the small screen.

According to MSW, a shoot went down for Mando S3 recently in Long Beach, CA, and he was told Din Djarin was facing off with Praetorian Guards, the same style featured in The Last Jedi, as well as red troopers. Apparently, the red Troopers were wearing Mando-style helmets, which you can see below, and they were on a starship set with the guards.

These helmets look like variants of the Imperial Super Commandos (Below) that the Empire employed during its reign. These units were featured in Star Wars Rebels and were Mandalorians who betrayed their own to work for the Empire, so it would make sense that some of them remain loyal to the Remnant. This would also provide for some intense battles between Mandos like Din and Bo, because unlike common Remnant forces, these troopers would have armor and the skills of their Mandalorian brothers and sisters.

The idea of Praetorian Guards being in Mando S3 is also intriguing, and could hint at further developments of this series’ cloning arc, so maybe Snoke V1 will make his debut as well.

Two other images released, which you can see below. It appears they’re from the ship set mentioned above, but no other details were provided in the image dump.

Nick and I will talk more about these images on next week’s episode of the SWTS, so don’t forget to tune into the Star Wars Time Show on a weekly basis via our podcast platforms or via YouTube if you prefer the livestream angle. 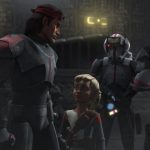