Twitter basically went on a Star Wars rampage late last week when Rahul Kohli, best known for playing Ravi in the TV series iZombie, sent out the tweet below.

Needless to say, Star Wars fans and geek sites around the net went into a frenzy, so much so that Kohli had to send out a retraction tweet and an apology video shortly after the initial tweet.

Even though he quickly retracted the tweet, many fans still believe that he is playing the role and just sent the retraction in an effort to belay suspicion until the Mando releases and also to get Lucasfilm off his back.

People were so into the idea of him playing Ezra that they immediately started making fan art.

The Mandalorian season 2 releases on October 30th, and more than likely there will be no Ezra Bridger in it. 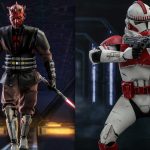