If you’re not watching the Star Wars Galaxy of Adventures shorts, then you’re robbing yourself of some radical animated Star Wars action, and the latest short is just another example of how badass this series looks.

In this short, the heroics of R2 are made to look even more boss level thanks to the anime-style animations, which just amplify the intensity of every shot. It doesn’t really recount a particular scene from a Star Wars movie, rather it uses dialogue from the Battle of Yavin to bring to life a whole new space battle featuring Red Squadron and their R2 units. I can’t use epic enough to describe how kickass this episode looks, so check it out above.

A new fun facts video has also released, and it details the Rebellion, so it’s a perfect companion for the short above. Fun Facts vids again provide detailed facts about characters, factions, weapons, and vehicles, so they don’t tell stories, rather they provide factual information for the franchise. Check it out below.

Live the Best Moments of Star Wars Celebration with this Video 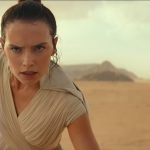 ‘The Rise of Skywalker’ – 4 Theories on What It Could Mean