Star Wars #6 2020 is out, and it picks up right where #5 left off, so Luke is in a precarious situation. Like I tend to do I’ve broken down the issue to highlight some of the more interesting new canon bits it adds to the franchise, as well as to point out some Easter eggs, so you can check all that out below.

Star Wars #6 2020 is out now and it furthered the tale of Luke Skywalker and his search for a new lightsaber, and it offered up some solid new Star Wars canon content.

Up first we find Luke about to die, in fact he does die, but fear not, the true hero of the Rebellion works his magic once again and saves the day by shocking the piss out of Verla.

I mean this is the umpteenth time R2 has literally saved the galaxy by saving the life of a key Skywalker or Jedi, so even though Luke blew up a Death Star, turned Vader back to the light, and helped banish Palpy, if it weren’t for R2 his mom would have died a Queen, and he would’ve died in a pit. R2 is the man-bot.

After Luke’s revival he decides not to kill Verla because he’s not psychotic like his dad, so she reluctantly agrees to tell him about a High Republic Era Jedi Outpost on Tempes. A nice canon nod to that new era that will soon be fleshed out in books.

Naturally Luke heads right to the Jedi Outpost, which is loaded with Easter eggs like the Jedi logo, a holocron, Jedi Temple Guard Armor, and the yellow lightsaber we saw Luke with months ago when this issue’s cover was teased.

While this dude is clearly tough, Luke is a Skywalker, so he defeats the firey spirit, giving him another solid duel on his canon based resume.

On a side note, Vader sensed the encounter and headed to the outpost but was too late to catch Luke, but the Inquisitor lets him know how strong his son truly is. I’m guessing Vader secretly enjoyed learning this fact based on how he feels about Luke in his own 2020 comic book run.

Luke heads back to the Rebel fleet and Leia makes him do his best He-Man impression to show off his new Yellow blade to pump up the Rebel Alliance. Thanks R2! 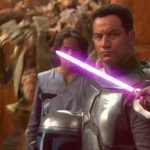 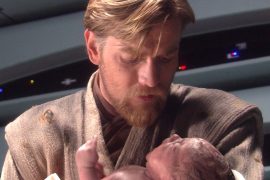