Well, the Princess isn’t as peace loving and kind as we once thought thanks to Star Wars #11, which showcases her unflinching dedication to the Rebel Alliance unlike we’ve ever seen before.

Please check out the video breakdown above to find out how the Princess almost killed Lando’s pal Lobot, and what it may mean for the former Administrator of the Cloud City.

Star Wars #11 2021 is out now and it continues the Operation Starlight thread from issues past.

Overall it’s another somewhat mundane issue in this saga between the Rebels and Commander Zahra, but it did offer up a portrayal of Princess Leia that has never really been done before.

I say this because she nearly kills Lobot by forcing him to keep working with the translator droid that they stole to craft a new code system.

She is cold and precise, even as Lando pleas for his friends life, who he is watching being killed right in front of his eyes. Leia doesn’t even try to find an alternative solution, she just coldly presses on, knowing full well that she may get Lobot killed in the process. Like I said it was a shock to see the Princess act this way, but I guess we know the Rebel Alliance will do whatever it takes to win the war, and one of its top and very noble leaders is no different.

Things get so dire for Lobot that Lando taps into his scoundrel roots and tries to stop the torture by punching Poe’s daddy in the kisser, but that only gets him locked up for being a traitor.

If anything this issue made it very clear how tenuous Lando’s initial time with the Rebels were. They didn’t trust him, he didn’t fully understand their deal, and now, after this, he clearly will have an ax to grind.

Anyway, all of this is going down so Leia can contact Starlight Squadron, who is getting worked by Zahra. So much so that Wedge gives us a Rogue Squadron Easter egg when he suggests a crazy maneuver to pull off after their fighters get caught in a tractor beam.

This provided a pretty cool action sequence in which the Rebels take the Hangar of Zahra’s ship, but it results in Poe’s Mommy getting captured, so we get a sad reference to him in her goodbye.

Speaking of references, this issue had a decent line from 3P0 when he was discussing who is maker was, and while he doesn’t remember, we do, so it was a nice little nod to Anakin’s technical  prowess.

Thanks to Anakin’s programming, 3P0 learns the new Rebel code system, so Lobot and the old droid can be decoupled, which ultimately saves Lobot’s life. Leia’s gamble paid off, but it appears it was a bit too much for Lando.

As the issue ends, any love he had for the Rebels is now gone, so he reaches out to Bib Fortuna, who is executing some fools on Jabba’s barge at the Sarlacc pit, just like Luke by the way. Move him into position!

It appears that Lando is now willing to sell the Rebels out, so he makes a deal to get Bib the old droid so they can learn how to crack the Rebels code! What a scoundrel, but can you blame him after what Leia just did?

Like I said, this was a decent issue, but nothing really juicy happened canon wise, or even action wise, so I’m left feeling a bit let down. 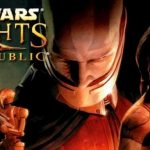 Aspyr Media Is Working on the KOTOR Remaster 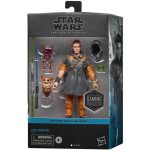