The ‘leakers’ over on Star Wars Leaks subreddit are back to try to fortune tell their way back into the community’s good graces this week with some super awesome ‘leaks’ that basically just says they think the show is going to release in either March or April. Again, no substantive evidence to support this other than looking at patterns and saying, “Hey this happened last time, so it will probably happen again this time.”

You can see that they are also saying that it will be ‘the same quality as the Clone Wars’. Well yes, it is the same team working on it and the same animation style and method, so I would assume it would be the same quality. 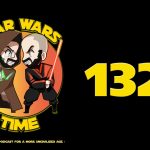