Gamestop has a new exclusive Funko Pop Deluxe Boba Fett up for pre-order, and it’s based on his iconic first appearance in The Empire Strikes Back.

Apparently the Pop will also be metallic, and as you can see, they are set in front of the Star Destroyer wall that was seen on Vader’s ship when he hires the bounty hunters to find Han Solo and the Falcon, so I’d assume all of the featured hunters will eventually be released to complete the scene and full wall.

Nick and I will talk more about this new Pop in next week’s episode of the SWTS, so don’t forget to tune into the Star Wars Time Show on a weekly basis via our podcast platforms or via YouTube if you prefer the livestream angle. 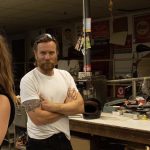 Rumor: Din Djarin To Appear in The Book of Boba Fett