Thanks to a recent episode of the Parks and Recollection podcast, which is hosted by Rob Lowe and Alan Yang, it sounds like a former alum from Parks and Recreation will be playing a role in the upcoming season of The Mandalorian.

Jim O’Heir was on that podcast lately, and while they were mostly discussing his time on the show, he was asked about any active projects he is currently working on. He essentially replied with a statement that makes his new gig sound very secretive, but Rob Lowe more or less let the cat out of the bag after O’Heir tried to play things close to his vest.

Rob Lowe: I will say, Jim, I know what you’re working on, and it rhymes with the latest installment of Bar Wars.

Unless Lowe is just messing with his former co-star it sounds like O’Heir is indeed working on a Star Wars project, and considering the only one that is known to be actively shooting right now is The Mandalorian, it is more than likely the Star Wars project Lowe referred to.

While Mando usually shoots in L.A. on an outdoor set or via the Volume versus actual locations, Bespin Bulletin is speculating that the New Mexico shoot may be tied to some desert shoot that has been happening on the L.A. train yard set in which a ship and campsite have been staged.

Having someone like O’Heir appear in the Mando-verse makes sense, especially in a cameo like role. Think about Stephen Root’s part in The Book of Boba Fett. O’Heir could have been tapped for something similar, or maybe it is for a beefier role. Either way it sounds like Gerry, Jerry, Larry, Terry will eventually pop up in a Star Wars property. 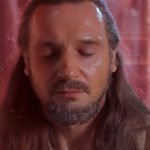