All sorts of revelations have been coming from the Star Wars: The Rise of Skywalker novel, which apparently some fans got early copies of while at this year’s C2E2 in Chi-town.

The biggest reveal though, was that Emperor Palpatine was indeed in a cloned body of himself, and not his actual corpse from Return of the Jedi. I for one thought he was a corpse, and didn’t buy into the clone stuff, but now I know the errors of my ways. As you can see in the excerpt below, Palp’s shell in TROS is indeed just that, a cloned body housing his Sith laden spirit. Even Kylo knew it, too bad it’s not made clear at all in the movie, not like that matters right!

A new passage from Cinefex doubles down on the Palp clone reveal too, so check that out below.

While that’s a doozy, we also got a few other reveals from the book, such as Ben’s last words to Rey after he became one with the Force. Like the man he shares a name with, he essentially assures Rey that he will always be with her. This passage also reinforces Finn’s clear connection to the Force.

Finally, this passage details Ben’s actual death and Rey’s resurrection, while also confirming that Ben didn’t become a Force ghost in the novelization either. 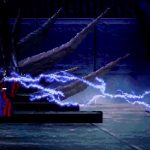 Rey and Ben Solo VS Palpatine the 16-bit Edition