Oscar Isaac appeared on a panel with Deadline for his new movie The Card Counter, and during the talk his work on Star Wars naturally came up.

He explained, “I enjoyed the challenge of those films and working with a very large group of incredible artists and actors, prop makers, set designers, and all that was really fun.” But he clarified that making big budget movies like Star Wars isn’t what he wants to do:

Ok, so that’s an interesting statement, and one that could be perceived to be a jab at those who worked with Isaac on the Star Wars films that he was in. I’m not sure if he’s referring to the directors and writers, or his cast members, but his statement is interesting none the less, and shows a level of disdain for working on big movies like Star Wars.

He went on to talk about how he enjoys the process of making art/indie films so much more that he doesn’t think he’d ever return to the Star Wars juggernaut. When asked if he’d never do another Star Wars film he replied with, “Probably, but who knows. If I need another house or something.”

Well I guess we should appreciate his candor! And I do believe he’d return for the right price and situation, money is a powerful thing. 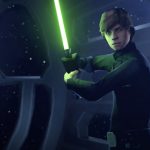 Read The First Chapter of Star Wars: The Light of The Jedi