Thanks to Phil Szostak, who is a Lucasfilm Creative Art Manager, we may have some insights into never before seen Force Ghost powers that could pop up in Star Wars: The Rise of Skywalker. Let’s just say that the title may be more literal than we think thanks to these powers, which at one time, were in the script for Star Wars: Return of the Jedi.

Phil’s tweet above features a 1981 version of the ROTJ script, in particular, it covers pages from Luke’s fight with Palpatine, as well as the celebration on Endor, and they’re quite revealing.

Apparently, at one point in time, Yoda and Obi-Wan’s Force ghosts were going to be assisting Luke in his fight with the Emperor. Basically, they served as invisible shields from what Palp described as the “netherworld” as he attacked Luke with Force lightning. Wherever the lighting would strike, Luke would see the ghosts of his Masters protecting him.

This is an interesting revelation on Force Ghost powers, and it could lead to an epic moment in TROS involving any of the main Force ghosts. We could see Luke leap back into action to protect Rey or even Kylo! Hell, we could see Yoda and Anakin teaming up too, or even Old Ben! You could technically have all of the Force Ghosts involved in whatever epic final battle that goes down between Palpatine and more than likely Rey and Ben, so I like that this concept originally came from the Maker, who we know has been talking with J.J. about TROS.

The other revelation that could play out in TROS is the fact that originally, Old Ben came back to Luke during the Endor celebration in his corporeal form. He literally rises from the dead and is flesh again! Obi-Wan explains his new form to Luke by telling him, “My need to stay in the netherworld has been resolved. Your father turned to the good side and I was able to disrupt his journey.”

Let that sink in a bit. At some point in time, George and his writing partners planned for at least Jedi to be able to come back from the dead. Not just as Force ghosts, but as flesh and blood beings. This could play out literally in TROS by both Anakin and Luke returning from the dead after Palp is more than likely finally vanquished, which in turn would pay off on the title’s meaning, as most Star Wars titles ultimately do for their film’s plots.

This is all speculation for now, but these concepts were in George’s mind before, so they’re not out of the realm of possibility to show up in The Rise of Skywalker. 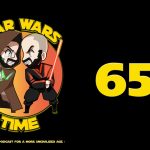