A book listing on Edelweiss, which apparently shouldn’t be public, has leaked for The Mandalorian: Boba Fett Returns, and it may provide some insights into when The Mandalorian Season 3 will hit Disney Plus.

If you poke around the listing, in particular the 4-arrow symbol by the book’s name, you’ll find a Key Selling Points area that lists the premier windows for The Book of Boba Fett and The Mandalorian Season 3. Boba’s show is listed for a December 2021 release, but curiously, The Mandalorian is listed for a Spring 2022 release. If this is true, then both shows must’ve gotten some filming done simultaneously, because as of right now, at least publicly, Mando hasn’t begun filming yet.

So if Mando S3 is really going to release in the Spring of 2022 instead of its usual fall slot, they had to have gotten some work in while filming for Book of Boba. Otherwise, the turn around would be too quick to get the show out a few months after Book of Boba debuts this December.

Nick and I will talk more about this leak in this week’s episode of the SWTS, so don’t forget to tune into the Star Wars Time Show on a weekly basis via our podcast platforms or via YouTube if you prefer the livestream angle.

the book of boba fettThe Mandalorian
0 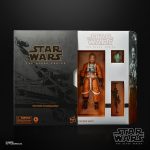