After a couple of weeks of speculation and leaks, Disney has officially announced that Ewan McGregor will be returning as Obi-Wan Kenobi in a new live action series for Disney+!

No word on if this announcement was planned for D23, but it is clear that this series has been in the works for a while and Disney was just very good at keeping it hush hush until recently.

No word on a release date/window, but I have a guess that this will not be coming out until 2021 at the earliest. 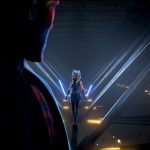