As a New Orleans Saints fan, it gives me great joy to announce that there will be no Superbowl trailer for Star Wars: Episode IX, the last entry in the Skywalker Saga.

This news comes from ‘buzz’ heard by The Hollywood Reporter, and while buzz isn’t a hard confirmation, it is highly likely that Disney would have publicized the fact that there would be a trailer dropping on Superbowl Sunday by this time. Also, not advertising during the Superbowl this year will save Disney upwards of $5 million, the cost of a 30 second ad.

Last year’s Solo trailer did generate a significant amount of buzz for the movie around the web, but it wasn’t enough to carry the movie to the massive box office success that Disney had become used to with the Star Wars brand.

It is looking more and more likely that the trailer will either be a stand alone drop via one of Disney’s many outlets or could be saved for Star Wars Celebration in April. 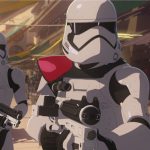