The final full trailer for The Mandalorian Season 3 aired last night during Dallas’ drubbing of Tampa Bay, and it offered many new looks at the series, which is due to hit Disney+ on March 1, 2023.

Due to the timing of the trailer’s release, we will break it down in full on today’s livestream, so use the links below to tune in.

You can also check out a handful of new stills, which were taken from the new spot.

Nick and I will fully breakdown and speculate on The Mandalorian Season 3 on today’s episode of the SWTS, so don’t forget to tune into the Star Wars Time Show on a weekly basis via our podcast platforms or via YouTube if you prefer the livestream angle. 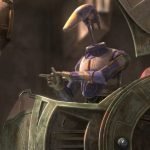