A new LEGO set is headed exclusively to Target in honor of The Empire Strikes Back’s 40th anniversary, which has pretty much been celebrated throughout this shit show of a year known as 2020. The set will honor ESB’s biggest moment, which is the duel between Vader and Luke, in particular, the “I’m your Father” moment.

The set contains 295 pieces and retails for $39.99. It will come with a special stand a nameplate to build to house the set on. You can check out an interview with the LEGO master builder who created this set over on StarWars.com.

Additional images and information about the LEGO Star Wars Bespin Duel set can be found below.

Launching August 27 exclusively on Target.com, the new LEGO Star Wars Bespin Duel set celebrates the climactic clash between Luke Skywalker and Darth Vader in Star Wars: The Empire Strikes Back, in honor of the film’s 40th anniversary. The set focuses heavily, however, on the moment that changed everything. It looks to be a fun build for LEGO fans, and an eye-catching display piece for anyone who loves The Empire Strikes Back. 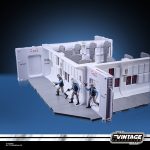