Another round of Reddit leaking happened for the early draft of Colin Trevorrow’s Star Wars Episode IX script, which was titled, Duel of the Fates. In this leak, we get much more flesh for the film’s final act, which includes more details on Rey and Kylo’s duel on Mortis, as well as Leia’s involvement in it and the Battle of Coruscant.

I once again recapped the main points in the video below, so find out what Episode IX may have been like if Carrie never passed, and Colin remained the writer/director.

Hey now fans of possible leaked scripts, Matt Heywood here for another round of Colin Trevorrow’s leaked Episode IX script, which has been further fleshed out from my last video.

Again, all of this comes from this RMB guy, but since my first video, many sites have come out to corroborate his claim that this is indeed a legit draft of Colin’s script. Also, make sure to watch the first video if you haven’t already, or parts of this one won’t make sense.

So we now have much more detail about the film’s last act, which was rather glossed over in the first dissection of this leak.

Let’s pick up with Kylo making it to the Remnicore system to find Tor Vallum.

He walks through an old battlefield full of dead Sith warriors en routed to Vallum’s fortress. Tor Vallum speaks to him when Kylo asks if he trained Plagueis, to which Vallum chides him for asking. He then tells Kylo he knows he’s here to obtain the powers of those who have come before, to take his place among the gods of Mortis.

Vallum also bust his balls for still not being a full sith, and then begins to teach him how to essentially use the force to steal the life force from living beings, a way to cheat death.

Things then head back to Coruscant with Team A, which consists of Rose, Finn, R2, and 3PO. They’re in the Coruscant underground after fleeing and Finn is shocked how many poor people are down there, to which Rose drops one of her rich people suck quotes.

It seems R2 and 3PO joke about golden rod being an elitist for not knowing how to navigate the underbelly of his former city.

Again their mission is the light a Force Beacon to broadcast a hologram of Leia to 50 planets, A New Hope style.

Back on Remincore Kylo removes the living force from a beast and he and Vallum enter a Force cave where Kylo fights Vader, but is bested.

Angry Kylo then demands to know where Mortis is, which Vallum calls the well of the living Force, aka, the source of the galaxy’s birth. Vallum says Kylo isn’t worthy of it, so Kylo drains his life force and kills him in true Sith apprentice fashion.

Back on coruscant Team A gets the beacon lit, so Leia’s hologram goes out, which plays out with the story cutting to all the planets getting it.

This is where we get a Bossk cameo, and apparently he’s no fan of the First Order.

The signal also reaches a boy and his sister on Tatooine, probably a symbolic call back, and then the message is cut short. Leia was basically telling everyone it’s time to fight or die.

We then cut to Team B, which consists of Rey, Poe, Chewie, and BB-8. They are on Bonadan and are sailing on a Razer sail ship. They get attacked by the Knights of Ren, but Rey takes them out by killing them.

This causes her to be conflicted so she talks to Poe about killing them, and he tried to make her feel better about it.

Rey then tells him that he can’t go where she’s going, and it is noted that Poe has a crush on her, which I definitely picked up on at the end of TLJ, so I’ve been Rey-po for life.

Rey really wants Poe to leave her side, but he can’t, so she mind tricks him, but he even beats that, so she eventually kisses him to break his will and he leaves.

Rey takes the Knights ship and heads off to Mortis, while the rest head back to the stolen star destroyer.

Now Hux contacts Kylo about the Resistance attack on Coruscant, and Kylo reveals he stopped the Force beacon. Hux wants Kylo to help on Coruscant, but he tells him to suck it up, because he’s headed elsewhere.

Apparently this is also when Leia heads to a club owned by Lando and asks for his help. He says his clients are first order, but due to his promise to Han, he’d help.

He still ushers her away though and says that the war they already won didn’t help, so he ultimately declines to get the smugglers to help her.

By this time Rey arrives at Mortis and so Does Kylo.

This is also when the final battle at Coruscant kicks off a la ROTJ.

Meanwhile Rey is exploring a mountain on Mortis and it gives her a Jakku flashback. She sees her Mother and Father leaving her due to some sort of danger they were facing.

Kylo also gets a vision from his past of sorts when he finds a house in the woods with a younger version of himself opening the door to find Han Solo.

They have a talk.

Kylo now confronts Rey on the mountain top, and they talk about how strong Mortis is in the Force and do some mind probing of each other.

They proceed to fight using the force and talking more crap on each other when Kylo proposes that, “I don’t have to be alone. With the power of this place, WE could rule t tthe galaxy as the ancients did. The dark side AND the light.”

Rey then drops a bomb on him by accusing him of doing something to her family. She confirms that her parents weren’t losers, rather Kylo and the Knights killed them due to orders from Snoke to take out anyone who could challenge him.

Apparently this ties back to her vision of them in the rain from TFA.

They keep battling and try to sap each other’s life forces.

Back on Coruscant it seems we get a legit RAM-PO moment from 3PO before returning back to Kylo and Rey.

At this point he strikes her face with his saber and blinds her, so she falls down the temple stairs out of sight.

Kylo then enters the temple on Mortis.

Sadly, on Coruscant, R2 gets destroyed, but Chewied straps his shell on his back a la ESB and his 3PO assist.

Once in the temple Kylo finds nothing of importance, so he gets angry and starts slashing the place up.

Force Ghost Luke shows up to tell him that he’s lost and that he is no Skywalker.

Rey senses Luke’s presence and covers her eyes like Kanan.

She battles kylo again and says,

“Our masters were wrong. I will not deny my anger and I will not reject my love. I am the darkness and I am the light.” Kylo: “You are nothing. You are NO ONE.” Rey: “No one is no one.”

As a side note, apparently Hux has been trying to use the Force all along and has collected lightsabers, but when he thinks the Order has lost he commits seppuku with one.

Back to the duel.

“Kylo counters Rey’s every move. They are evenly matched. Two sides of the same coin — flame and shadow — fighting to the death. A vicious swing and Kylo’s lightsaber shatters at the hilt. Destroyed along with several fingers on his hand.”

Rey then stands over him and separates her dual bladed saber. The Force surrounds her as Kylo gets super pissed. He starts to extract the life force out of her, which begins to heals his face. Rey starts to get very weak and begins to die.

She pleads to Ben to stop. Leia senses this and reaches out to Kylo and begs him to come home. He feels what Vader felt when confronted with Luke’s pain, so he grabs Rey’s hand to return her life force.

This act essentially kills Kylo, but with his dying breath he reveals Rey’s last name is Solana.

The Battle of Coruscant rages on as Rey is essentially transported to the Astral Plain.

Yoda, Luke, and Obi Wan appear before her. Rey: “Is this death?” Obi-Wan: “In this place, there is no such thing as death.” Yoda reveals Rey succeeded were they failed. Luke: “You choose to embrace the dark side and the light. To find the balance within.”

They offer her to say with them, or to return to the living, and Obi-wan tell her that she’s a Jedi, but she won’t be the last.

Chewie gets R2 all patched up with help from Leia dropping in a disk a la ANH, and he then projects 60 years worth of memories from his POV such as Luke buying him, Luke getting the saber, flying through the Death Star. Shit I may cry just imagining this moment, how cool.

The movie ends with a cut to Modesta, where Finn is at. Rey Solana Arrives to train a new group of Jedi.

I’ll tell you what, with all of this additional meat added to the leaked Trevorrow script bone, I have to say that this take on Episode IX sounds pretty damn great.

It not only honors most of the threads coming out of TLJ, but it had nods to TFA moments, and original trilogy moments galore.

Again, I also prefer the Rey No One deal, and how she chose to embrace the light and dark, which would have been a new concept for live action Skywalker Saga Star Wars.

Of course, I also liked the Rey Poe crush, because I’ve felt that since the end of TLJ.

Well, this was fun, but I’m not sure it really helps anything with the sequel trilogy. We got what we got, and will never know how things would’ve turned out if Carrie never died, or if Lucasfilm decided to use a lone writer for all three movies.

I have to say though, I wouldn’t mind watching this version in the least now, especially thanks to its nods to animated Star Wars with Mortis and the deeper meanings of the Force and the galaxy. 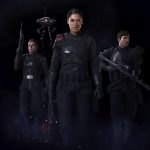