Today, Vanity Fair dropped all sorts of Star Wars: The Rise of Skywalker preview bombs on the faces of Star Wars fans across the globe, so I’m here to recap the juicier reveals. I highly recommend checking out all of VF’s coverage, because it’s deep, and a few articles are behind a paywall, so there’s more to learn about characters played by Richard E. Grant (Allegiant General Pryde) and Keri Russel (Zorri Bliss).

Anyway, among the juicier reveals featured in the articles are new images from the Wadi Rum set by Annie Leibovitz, who has shot Star Wars for decades. New planet names are also revealed, in addition to details about Kylo and the Knights of Ren! Oh, there’s also the first shot of Luke, who is with R2 and wearing his TLJ robe set.

A few actors also provided some insights on their characters, with Adam Driver and Daisy Ridley dropping some interesting quotes about their powerful Force sensitive characters, so as I teased, the VF Rise coverage is strong.

Below you will find the key bullet points of information from VF’s coverage, but for the full articles, you should head over to Vanity Fair online or in a store near you. 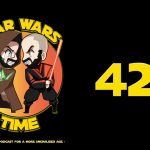 The Star Wars Timeline via Galaxy of Adventures