Making Star Wars has secured an exclusive image from the upcoming third season of The Mandalorian, and it pays off on a rumor he posted many months ago about familiar looking guards from the sequel trilogy making an appearance in Mando.

For those not looking for any Mando S3 reveals, even if rumors, you should hit the eject button now!

According to MSW, the image below is what he believes to be an early Praetorian Guard. These guards were featured heavily in The Last Jedi as Snoke’s protectors, and as you can see from the art below, these Mando S3 warriors look very similar, albeit with a bit of Mandalorian flair in the helmets.

You have to wonder if these will be Moff Gideon’s guards, and if they will be former Mandalorian’s themselves. MSW does speculate something similar, at least in regards to these red guards being aligned with Gideon. The whole former mandalorians speculation is a SWTS addition.

Considering Gideon’s obsession with Mandalore, Mandalorians, and the Force, there’s a good chance that these new guards have some ties to the warrior world and its culture.

Many fans may also begin to wonder if they’ll see Snoke in Mando S3 now that an early form of his guards are making their debut, but according to MSW, he has no information on the wrinkled guy’s involvement.

Nick and I will talk more about this leak on this week’s episode of the SWTS, so don’t forget to tune into the Star Wars Time Show on a weekly basis via our podcast platforms or via YouTube if you prefer the livestream angle. 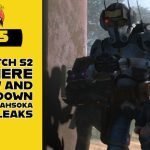