Over the last few weeks we have gotten more information on the new good guys that we will be following in the new High Republic era of Star Wars, but until now, we have only gotten small glimpses or blurbs about the new baddies. We already know a bit about the Nihil and how they will be wreaking havoc across the galaxy in the wake of the Great Disaster, but in this new article from the official Star Wars site, we find out about another new villainous race of being, the Drengir.

“As the Jedi struggle to deal with the aftermath of the Great Disaster, a new creeping terror rises from the ground beneath their feet. The Drengir are sentient plant-life who are looking to reap a terrible harvest across the galactic frontier,” says Cavan Scott, writer of Marvel’s upcoming The High Republic series. “The seed for the vegetation-based villains came from a sketch by [legendary Star Wars concept artist] Iain McCaig in the early days of The High Republic’s development. Iain had been sketching monsters and there was one creature that was covered in vines and creepers. It sparked off the inspiration for what became the Drengir and I quickly fired off a document outlining what could be their culture and background to the rest of the group, drawing on research I’d been reading about how real-world plants thrive and communicate with each other.”

The Drengir are definitely a bit different than the typical Sith or Imperial bad guys that some fans are used to seeing, but I am interested to see how they plan to develop this new race of plant-based terrors and how exactly they will cause problems for all powerful Jedi.

While the Drengir are stirring up problems in the soil, the Nihil are still out there planning and plotting their overthrow of the galactic order.

“The Nihil are organized into three main divisions called Tempests, each with its own captain who wields total control,” says Soule. “They are frightening in a way that feels great for Star Wars, in part because their ‘code,’ if you can call it that, is so simple: the Nihil take what they want. If you stand in their way, they will kill you and everyone you love. But even chaos agents can have goals…and the Nihil’s plans run directly through both the Republic and the Jedi Order.”

No good galactic terror organization is complete without a leader or two, so Charles Soule gave us a little more info on one of the head honchos of the Nihil named Marchion Ro.

“Marchion Ro holds an important post within the greater Nihil organization — he is the Eye of the Nihil, as was his father before him. He doesn’t give the orders — that’s up to the Tempest Runners — but in a very real way, everything revolves around him,” says Soule. “The things that make the Nihil more than just a bunch of Outer Rim raiders all come from Marchion. He is also, in every sense, a bad guy. And it’s been fantastic building someone around which to focus the darker elements of our High Republic story.” 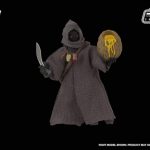