LEGO Star Wars: The Skywalker Saga is the culmination of all LEGO Star Wars games that have ever been released. We have been tracking the game since it was announced, but unfortunately for the fans, the game has been delayed multiple times, the most recent being until Spring 2022.

The good thing is that we have a new gameplay trailer to show off what we can expect from the game when it finally releases. Check it out.

This trailer essentially gives an overview of the entire saga by showing off scenes and gameplay sections from all 3 trilogies. We get to see gameplay with tons of different characters including Anakin, Luke, Rey, Finn, Lando, and more. Plus it has the always incredible Williams score to accompany all of the awesome action.

LEGO Star Wars: The Skywalker Saga is set to release in Spring 2022. 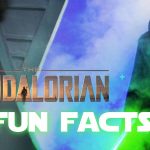 11 Fun Facts About Luke Skywalker’s Appearance in ‘The Mandalorian’