This week’s Star Wars Galaxy of Adventures short has been released, and its subject is the General, General Leia that is.

It mostly covers her time as the General leading a bunch of kids against the First Order, but it ends with an awesome segment that shows the Princess over time being a boss with all of the various people she has inspired or led over her two trilogies worth of stories. 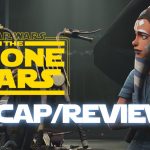 The Clone Wars Season 7, Episode 5 Recap and Review – “Gone With a Trace”