Star Wars News Net has posted new details on the rumored appearance of Ahsoka Tano in The Mandalorian Season 2, which would mark the characters first foray into live-action Star Wars if true. Apparently, they have sources that know the goods, so they’ve recapped a few new details about how Ahsoka will be used in Mando, and yes they’re going with Rosario Dawson as playing the former Jedi.

In terms of Ahsoka’s garb she will be wearing a hooded cloak that is more similar to what we saw her wearing at the end of The Clone Wars than her vibrant white robe from the Rebels finale. She will be first seen in the cloak with her hood on, but fans will get to see her blue and white head tails flow at some point according to SWNN.

Ahsoka will indeed be sporting a lightsaber in Mando, but apparently it will be a blue saber, and not her white bladed ones from Rebels. This could imply her possibly following the Jedi way again, or maybe as an homage to Anakin after hearing about his turn back to the light. It is unknown if she will wield a second saber though.

More than a Tease

Ahsoka’s arrival in The Mandalorian will be more than just a cameo moment. SWNN reports that she will have a “Luke in The Last Jedi” moment in terms of his face-off with the First Order at the end of the film. Obviously she won’t be staring down the Order, so there’s a good chance this showdown will be with Gideon and whatever forces he’s kept amassing. This potential mirrored scene could also give more weight to the idea that she’s returning to the Jedi religion like Luke did before he passed.

Her turn in The Mandalorian is also being treated as a test run for the live action version of the character, so we should expect to get a good dose of her personality to see, and if she tests well, then there’s potential for a spin-off series with Ahsoka as the lead. 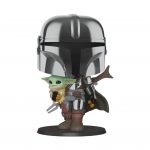