The 2020 run of the Darth Vader Marvel comic is operational again thanks to the arrival of the third issue, which continues Vader’s hunt for those he feel made his son weak.

Per the norm, I’ve broken out some of the more interesting canon additions this issue offers, as well as a few Easter eggs it presents, so head on down below to check them out!

Hooray for new Vader comics, it’s been quite some time since we got a new one, but this week, Darth Vader #3 dropped, and it added a few new interesting bits of Vader canon that tie his Anakin days to what he’s up to as the Dark Lord of the Sith post Empire Strikes Back.

First off, in his quest to destroy those who made his son weak, he and Sabe head to Naboo and land in the exact same field where he as Anakin surfed on the back of a wonky looking Naboo space cow to woo the heart of a former Queen and new Senator.

On the next stop of Vader’s Naboo love spot tour he heads to the Naberrie summer home, in particular the dining room where he creepily fed Padme fruit with the Force, and wished he could wish away all of his feelings of love.

While on this same stop, we also learn that Captain Typho is still around, who was Padme’s chief of security in Clones and ROTS. He along with Sabe and Captain Tonra are all looking for vengeance against Padme’s killer.

Through Typho we learn that this group also holds Anakin Skywalker in the same regard as Padme thanks to him saving her life in Clones, which was an interesting reveal.

Up next in the interesting canon bits this issue added is the fact that the Gungan sub Qui-Got and Obi used in TPM seems to have ended up at Padme’s retreat, because the group takes it to find the holo-recording Vader is looking for.

In fact, while in the sub they get attacked by a Colo claw fish like the Jedi did in TPM, which had to be a clear homage to that scene, albeit with a Vader kicking the shit of stuff twist.

Interestingly enough, it was revealed on this sub ride that Padme had sent Sabe and Tonra to Tatooine to search for Shmi Skywalker right after she became Senator, so that was a cool little canon addition.

And finally, we learn that the Gungans built a shrine to celebrate the pact they made with Queen Amidala, and in it is a mural featuring the end scene of TPM, complete with Padawan Anakin, which Vader ultimately destroys because he has some issues.

Oh, and this tour of Anakin and Padme’s love locations was just a ruse, as we find out at the end of the issue that Sabe, Typho, and Tonra set a trap for Vader because they think he killed both Padme and Anakin on Mustafar, and they’re right form a certain point of view, correct Old Ben?

hanks for watching, if you enjoyed this video please considering liking it and subbing to our YouTube channel. We’d also love for you to join in with our weekly Star Wars podcast, so use the links in this video’s description, or head to StarWarsTime.net to subscribe to the platform of your choice. 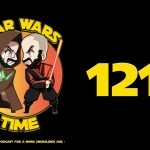