A new trailer has released for the The Bad Batch, and it not only revealed that the first episode will be 70-minutes long, but it also showed off a new mystery character in the form of a kid who is probably a clone. Oh, Captain Rex showed up too!

The Bad Batch hits Disney Plus on May the 4th with a 70-minute premier. It will then release new episodes on Fridays starting on May 7th.

A new poster has also been released, which you can check out below.

Nick and I will talk more about this trailer in this week’s episode of the SWTS, so don’t forget to tune into the Star Wars Time Show on a weekly basis via our podcast platforms or via YouTube if you prefer the livestream angle.

About The Bad Batch

“Star Wars: The Bad Batch” follows the elite and experimental clones of the Bad Batch (first introduced in “The Clone Wars”) as they find their way in a rapidly changing galaxy in the immediate aftermath of the Clone War. Members of Bad Batch—a unique squad of clones who vary genetically from their brothers in the Clone Army—each possess a singular exceptional skill that makes them extraordinarily effective soldiers and a formidable crew. 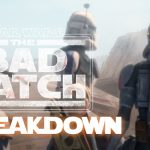