Making Star Wars is back at it this week dropping some intriguing rumors about the Star Wars: Ahsoka series, which should hit Disney+ in 2023. As always, while these are rumors, those who want a fresh take on Ahsoka when it releases should pull the rip cord now.

According to MSW, he was able to piece together some timeline information based on a character codename he’s not willing to reveal yet, but in figuring out that code, he was able to determine that the Ahsoka series will feature the titular character at various phases in her life. This will be achieved through the use of the World Between Worlds, which is more or less the Star Wars version of time travel and a multiverse.

Specifically, fans should expect to see a teenage The Clone Wars-era Ahsoka, the Ahsoka the White version from the Rebels epilogue, and of course the Mando-verse era Ahsoka played by Rosario Dawson. MSW is reporting that there will be a different actress to play the younger Ahsoka, but he didn’t know if Ashley Eckstein would be providing the voice.

It should be noted that these younger versions of Ahsoka will just be glimpses, and that Rosario’s version of the character will be utilized for most of the series’ runtime.

Like mentioned above, the World Between Worlds will be the driver of seeing Ahsoka at different times in her life, but it will also serve as a learning tool through a “what-if” type of presentation.

According to MSW, fans will see many possibly outcomes for Ahsoka’s life via the WBW, and will learn alongside Ahsoka, that no matter what happens, all these moments lead to a particular major moment in her story. That moment will be her choice to leave the Jedi order, and how even if she did return, her outcome would be unchanged.

In fact, MSW reports that fans will learn that if Ahsoka did return, she would have been the one facing Anakin “Darth Vader” Skywalker on Mustafar, and that she, and not Obi-Wan, would have bested him by utilizing the high-ground. This is due to the fact that no matter what, Anakin’s fall had to happen to ensure Ahsoka and the Skywalkers ended up where they needed to be in the proper Star Wars timeline.

In essence, the WBW will show Ahsoka that Anakin Skywalker was truly destined to fall to the Dark Side, but along the way fans will be treated to some of the different outcomes the WBW can offer, which will showcase some crazy moments like Clone Wars era Ahsoka dueling with Anakin Skywalker on Mustafar.

Finally, from the WBW front, it also sounds like Ahsoka will experience other visions such as what would have happened if she killed Thrawn before Ezra used the Purgils, but like mentioned earlier, her destiny always remains the same no matter what scenarios are altered through the WBW. Essentially, she will learn over the course of the series that she must embrace her destiny, and that she can’t change it. As MSW speculates, this is probably why she seems so at peace by the time she’s chilling with Luke Skywalker in the Mando-verse, so the Ahsoka series may take place a bit earlier than some of the Mando-verse content released to-date.

So yes, MSW is also confirming that Hayden is back, and his face will be shown. In particular, he will appear as Lord Vader from Revenge of the Sith, Mustafar edition. Apparently, he has been training for these sequences, and fans should expect to see Ahsoka fight Vader in more than one way in the series.

Also, MSW is stating that young Ahsoka and Anakin will be featured in some live-action Clone Wars-era battles. It wasn’t clear if it’s just more Ahsoka versus Anakin during this period, or if it’ll be them fighting together before his fall, but either way, fans will see the younger Ahsoka in action with some version of Sky Guy. 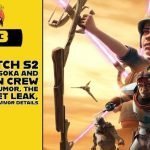