Bespin Bulletin has snagged some set photos from The Mandalorian Season 3’s production, and they feature a mysterious Mandalorian sporting what appears to be maroon and green colored armor.

This could very well be one of the Mandos from a leak we reported on a few weeks back on the show, because it’s clearly not Din, Axe, Bo, or Koska. I won’t go into detail on that report, but let’s just say that it implies that we will see a few more Mandos on screen in Season 3 of The Mandalorian.

You also may notice from these shots that there appears to be some fake snow dressing the set, so we could be in store for another snow/ice planet in the upcoming season of the show.

You can get a better look at the mysterious Mando via BB’s video below.

Nick and I will talk more about these set photos on today’s episode of the SWTS, so don’t forget to tune into the Star Wars Time Show on a weekly basis via our podcast platforms or via YouTube if you prefer the livestream angle. 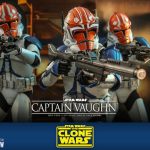