EA and DICE are continuing to to pump out the Clone Wars era content for Star Wars Battlefront II. This new round of content coming out will introduce a new map and 2 new Clone Wars era units to the game

The new map will be a Capital Supremacy version of Naboo. All combat on this map will take place in the streets of the capital city of Naboo, so get ready for some close quarters combat.

The first new unit coming to the game will be the Droideka. Fans have been calling for this rolly polly droid for a while, and it seems like DICE has finally obliged. The Droideka will feature the following abilities: Twin Blaster Cannons, Wheel Form, Overload, and Energy Shield.

The next new unit is the TX-130 fighting tank. This is one of the most commonly seen tanks in the prequel trilogy and Clone Wars cartoon series, but this tank is not to be underestimated. It has incredible firepower and can take a beating before falling out of commission.

The abilities for the TX-130 are as follows: Laser Cannon, Laser Barrage, Rockets, and Charge Mode.

For more information on the abilities of these new units and a quick check in on some new appearances for current characters, you can visit the official Battlefront II forums. 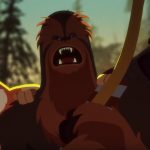