Ash Crossan of Screen Rant had a conversation with Mena Massoud, the star of Disney’s live-action Aladdin, about what it would mean to him to be cast in the Star Wars universe. Ash opens the conversation by asking Mena about his infamous Instagram post that essentially put him into the front runner seat for the role. Check it out.

While many of the initial fan castings for Ezra Bridger went to internet darling Rahul Kohli, people started to see the merits of Mena as Ezra after his Instagram post and seeing his work in Aladdin.

There has been no official casting news on any of the Ahsoka cast yet, other than Ahsoka herself, but we could hear something more definitive on November 12th, aka Disney+ Day. 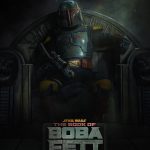 The Book of Boba Fett Will Debut on December 29th on Disney+, New Poster Unveiled