There were plenty of casting rumors that permeated the Star Wars space in the months leading up to the release of The Rise of Skywalker. One of the more prominent rumors was that Matt Smith of Dr. Who fame would be in the movie in some capacity.

Ultimately, he wasn’t in the film and many people assumed the rumor was nothing more than that, a false rumor, but in a recent interview with Josh Horowitz’s Happy Sad Confused podcast, Smith confirmed that he was nearly cast in the film in a ‘transformative role.”

Smith admits that he never actually filmed anything for TROS, but he did have this to say about the part:

“We were close to me being in it. The thing they were thinking of me for, eventually the part became obsolete and they didn’t need it,” Smith said. He added, “It was a pretty groovy part and concept. It was a big thing. A big story detail. A transformative Star Wars story detail. It was a big shift in the history of the franchise.”

Horowitz asked Smith if the role was going to be Palpatine’s son, who was also a clone of Palpatine himself, but Smith was mum on all details concerning the character, though there was a bit of cheeky-ness to his denial.

One of the main theories surrounding Smith pre-TROS was that he would play an important dark side acolyte or a right hand to Palpatine on Exogol, but now that he movie has been released, some have begun to speculate that the original plan was to have Smith playing a “re-invigorated, youthful Palpatine” after he drained Rey and Kylo in their final fight. This would also mean that he would have played the role of Rey’s father since her father was a Palpatine clone.

While these rumors may never be fully revealed, there is still hope that Smith could make this mystery role happen in the form of a Disney+ show. There’s no denying that Disney sees Disney+ as a place to continue to flesh out the known time periods in Star Wars history, so it is possible that we see a show about the rise of Palpatine during his younger years with Smith in a starring role. Only time will tell if something like this comes to fruition. 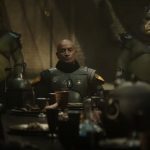