I went ahead and recorded a new rant for a series of leaked images that hint at Luke Skywalker’s X-Wing being featured in Star Wars: Episode IX, and not just as a submerged X-Wing.

It sounds like the X-Wing may possibly be used in a flashback scene, but regardless of how it is used, the images below definitely lead me to believe that it will at least be featured in some form or fashion. Anyway, tune into the rant below for my thoughts on the leaked pics.

The other rumors come from the latest episode of Making Star Wars’ Now This is Podcasting. The team ran through a bevy of Star Wars: Episode IX rumors that they’ve been told, but haven’t verified, so as they warn on their site, take these with a grain of salt until more information can be verified. There are some wild rumors in the list below, as well as rumored scenes and moments I’d love to see.

If anything else, these will make for great topics on this week’s Star Wars Time Show, so make sure to tune in next Tuesday when the episode goes live. 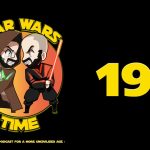 Topher Grace’s ‘Star Wars: Always’ Mega-trailer is a Brilliant and Moving Summary of all 10 Films