Star Wars 16 is out now, and it delves deeper into the troubled relationship between Luke Skywalker and Darth Vader, all while moving the War of the Bounty Hunters plot along. Head on down below to check out the full recap.

Star Wars #16 released this week, and while it helped to further along both the Star Wars comic main plot and the War of the Bounty Hunters Mini-series, like previous issues of the run, it felt very flat compared to the other comics that are crossing over with the excellent Boba Fett led series.

The issue starts with Luke revising his fight with his Daddy, but this time he envisions himself being a bit more prepared and powerful. It’s a manifestation of his newfound confidence since the events of ESB, which is also making him think that he could indeed face Vader again and be successful, which bodes well for his mission to save Solo from Crimson Dawn.

But, like Skywalker’s do, he’s fearful too, so his connection to the Force isn’t as strong as he thinks.

Anyway, the issue transitioned back to Leia’s gang at the CD party, and we get some little ties to the Solo movie when Lando talks about knowing Qi’ra and what type of person she is as they watch her fight Vader.

At this point Leia calls in Luke, thinking he will be the game changer they need to free Han, but first he has to deal with an Imperial blockade of the planet.

Thanks to a diversion he makes his way down to the planet, but as was teased in War of the Bounty Hunters 3, Vader contacts him on a secure channel to talk some shit to weaken his mind, and it worked like a charm, because as the issue ends and it looks like Han is about to be sliced and diced, Luke apologizes to Leia for not being ready to face Vader again, even though when the issue started he was having visions of his triumphs. Talk about daddy issues! Luke’s got em bad!

I guess if anything else, an issue like this does provide some interesting different perspectives of the War mini-series, but outside of that, this is another basic issue of the Star Wars run in 2021. 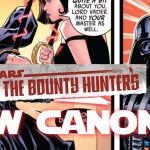 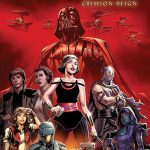