This week’s stylized looking Galaxy of Adventures short retells the scene in A New Hope in which Luke is training with his Father’s lightsaber for the first time. You know, the one where Obi-Wan sets him up with a training remote that gets the best of him at first? Yeah, that little ball Finn picks up in TFA, that thing.

Anyway, thanks to this series, anime-infused visual style and cinematography, this scene now looks more radical than every before. The intensity is ramped up, the comedy is heightened, and overall it just feels like a more powerful version of the original moment between everyone on board the Falcon.

Like a few of the commenters on the short, I too feel that the entire Star Wars saga should get fully fleshed out animated counterparts. These shorts are just too damn awesome looking to not give them greater attention, so if you haven’t seen one yet, treat yourself to the radicalization, in a tubular way that is, of Star Wars’ more iconic moments. 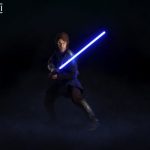