Lucasfilm has teased a massive mural that will be on display in Chicago at Star Wars Celebration in a few weeks. The mural will be 10-feet-tall and 88-feet long, and it will feature the entire Star Wars movie saga, including imagery from Star Wars: Episode IX. It will also include homages to The Clone Wars and Star Wars Rebels, so its awesome potential is high.

The original trilogy section has been teased, which you can see in full below, so based on that snippet you know this thing is going to be beyond amazing. The art itself comes from Jason Palmer, who trained under Star Wars movie poster master, Drew Struzan. You can definitely see Drew’s influence over Palmer’s work, but his illustrations also stand on their own in this killer looking mural. Doug Chiang and Erik Tiemens also contributed to the poster using their years of Lucasfilm art department experience to do so.

I hope the final piece will be sold as a print or poster, because I know it’s going to be to die for. I’m not asking for the mural-sized version, I just want something I can hang in the cave to admire. I’ll definitely be checking it out at the show, so stay tuned for my reaction. 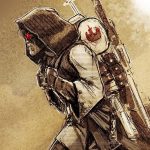