Many long time fans of Ahsoka Tano may have found the character’s look in the latest episode of The Mandalorian a little jarring due to the changes made to her head tails, aka Lekku and Montrails, for the live action version.

As you can in the images above, the Ahsoka’s Montrals (the top part of her head tails) and Lekku (the bottom part) are significantly longer and more pronounced in the Rebels animated series than they are in the live action Mandalorian. According to Character Concept Designer Brian Matyas, the change was made due to some practical concerns with longer head tails.

Many fans have pointed out that this could have been rectified with the simple use of CGI to compliment the practical bits that were already there, but in the end, the decision was made to move forward with the smaller lekku/montrals.

In my opinion, seeing Ahskoa with the modified head tails was definitely a little jarring, and while it didn’t take away from the performance overall, it did irk me a bit while watching the episode. She essentially looks the same as she did when we were first introduced to her in the Clone Wars film from 2008.

Hopefully Dave and Jon will discuss this in the behind the scenes series for season 2. Perhaps they can give some sort of environmental explanation as to why the physical change occurred, eg: the clearly harsh environment on Corvus caused her lekku/montrals to retract while on the planet. 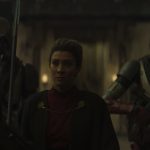