Ever since Ahsoka mentioned that she was hunting for Grand Admiral Thrawn in The Mandalorian fans have been speculating who may play him in the flesh. Fans have also been speculating who may play the live action version of Ezra Bridger, because Ezra and Thrawn’s fates are intertwined thanks to Star Wars Rebels. Now, according to LRMOnline, fans may finally get their answers.

Obviously this is all still rumored, even though LRM is confirming their leak, but according to their sources, Mena Massoud is definitely playing Ezra, and Lars Mikkelsen will be playing Thrawn. The Mena rumor has been out there for a while, we even discussed it on the show and site, so hopefully LRM’s new report is true, because we do believe he’s a fantastic choice to play the Jedi from Lothal.

Lars on the other hand is also someone most fans have had pegged to play Thrawn, mostly because he voiced the character in Rebels, and he really does have a Thrawn look. Sans blue skin and red eyes of course, so like the rumored Mena confirmation, here’s to hoping the Lars rumor is true as well.

Nick and I will talk more about this report in next week’s episode of the SWTS, so don’t forget to tune into the Star Wars Time Show on a weekly basis via our podcast platforms or via YouTube if you prefer the livestream angle. 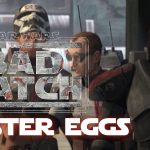