Here I thought all along that lightsabers came from a far, far away galaxy, but thanks to Pablo Hidalgo’s eagle eyes, we now know that they actually come from our own galaxy.

Hidalgo shared a new revelation he had while watching The Empire Strikes Back recently, and it involves the scene when Luke uses the Force to pull his lightsaber from the ice in the Wampa’s cave. He noticed that if you look close enough, you can still see the words “New York” on the very bottom of the hilt.

This is due to the fact that the lightsaber prop was fashioned from a Graflex camera flash holder, which were indeed produced in New York. So unfortunately, as you may have guessed, I was being an asshole with my title, sadly lightsabers only exist in New York if you can find an antique dealer with old camera parts.

Either way it is a fun revelation all these years later, and good luck at never being able to unsee this error in Empire! 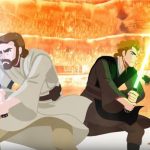