The Ahsoka series is shaking up to be one heck of a ride if past rumors turn out to be true, and now today we may know a bit more about which cast members are playing certain characters in the series.

Bespin Bulletin is reporting that his sources have told him that Mary Elizabeth Winstead will indeed be playing Hera Syndullah in the series. This has been the speculation all along, so it now sounds like the prediction is coming true. No other details on Hera’s role in Ahsoka have been released outside of the Winstead casting.

In addition to the Hera news, Making Star Wars is reporting that Ray Stevenson may be playing a new character named Baylon. MSW thinks this is the character’s actual name, and not a codename. According to the report, Baylon has an assassin and a droid under his command, and he is either the leader of an army from the “New Beyond” that is helping Thrawn, or he is a leader of a faction in this unexplored galaxy, but apparently he is an important character and will get plenty of screen time.

Nick and I will talk more about these rumors on the next episode of the SWTS, so don’t forget to tune into the Star Wars Time Show on a weekly basis via our podcast platforms or via YouTube if you prefer the livestream angle. 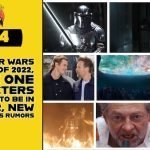