Composer James Newton Howard appeared on the Score: The Podcast show recently, and while rattling off a few upcoming projects he inadvertently dropped some interesting news for Star Wars fans. Apparently Larry Kasdan is working in a six-part documentary on George Lucas and ILM, and James Newton Howard has scored it.

He didn’t provide anymore details besides that, but he did say it was “Amazing,” and that he has completed his work on it. This means that the project is probably almost close to being complete, but again, no other details were mentioned. It’s almost as if Howard may have jumped the gun on the announcement, but either way the project sounds like a great treat for fans of Star Wars, and the other franchises George helped to shape with ILM.

Stay tuned for more details on this one! You can listen to the full interview on Apple Podcasts, but the documentary stuff pops up around the 1:07:00 mark. 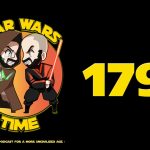