The Auralnauts have released their Kylo Ren Reacts video for the D23 special look footage at Star Wars: The Rise of Skywalker, and it’s worth your time if you like having some fun at Star Wars’ expense.

If you’ve never seen one of these before, Kylo basically is a YouTuber who does reaction videos to Star Wars trailers and films, and of course he’s never too happy about what he sees unless it involves him. So in this episode, he goes over the D23 special look at TROS and provides choice comments and observations for each scene.

He definitely takes issue with Dark Side Rey, especially her fold-out lightsaber, which he laughs at for an uncomfortable amount of time. He has a great line about how Maul figured out the staff saber, which is just one of many as he picks apart the D23 footage.

He also goes into a talk on those who hate Disney Star Wars and brings up a good point about how convenient the story is in A New Hope, which I honestly never thought of before.

This Kylo guy knows his Star Wars, so check him out above. 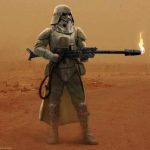