It looks like a cover from the upcoming Kylo Ren comic book mini-series has leaked, and the art is rather shocking.

For some reason I though the Knights were his creation, possibly with the other students who betrayed Luke fleshing out their numbers, but it now appears that they’re a faction that existed before his turn. I’m assuming the dude with the red saber is probably who he has to kill to take the mantle of Leader of the Knights of Ren.

Either way I’m even more intrigued in this comic book run now, and will definitely be jumping on it when it drops in the next few weeks. 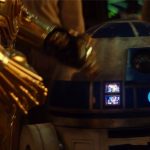